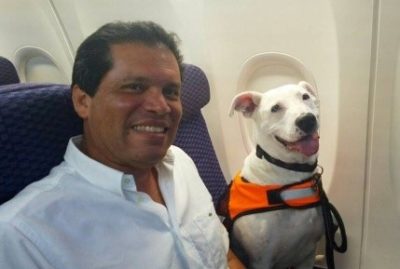 A few years back a dog arrived at the shelter as a stray animal. Vex, as he was named, showed potential and was assigned to the TREATS Dog Training Program for obedience and behavior training in preparation for the new life ahead of him. His success was somewhat surprising as he is 80% deaf. More on the possible cause of his deafness later.

Eventually, Vex, renamed Manolo, was adopted and began a new life of travel and adventure. Manolo’s exceptional skills have lead him to a career as a service animal. His owners fly to Colombia quite often and Manolo comes right along with them, in the plane’s cabin. Here, he either sits quietly or visits with the other passengers.

On a veterinary visit, it was discovered Manolo had eight BBs lodged in his head and other parts of his body. He was apparently used as a hog dog and, when he could no longer hear well enough, he was abandoned. Additionally, Manolo had suffered some head trauma.

Manolo’s adopters still remain in contact with the Animal Services department and update the TREATS staff on his progress. He continues to do well and is a successful service dog, going anywhere that he is needed.

Manolo was a badly treated, stray animal with what appeared to be a dim future. He overcame his difficulties and, thanks to training, patience and kindness, has become a shining light in the lives of his owners and others who come across his path.

Side note: Manolo has two different colored eyes and his owners tell the curious that he is okay, but lost his contact lens.